In this post, “we” refers to Good Ventures and the Open Philanthropy Project, who work as partners.

Note: This post originally appeared in the monthly farm animal welfare newsletter written by our farm animal welfare team. Sign up here to receive regular email updates with research and insights into a farm animal advocacy research topic. We decided to cross-post this one because we thought it was especially interesting and wanted to make people aware of the newsletter, but note that the newsletter is not thoroughly vetted by other staff and does not necessarily represent consensus views of the Open Philanthropy Project as a whole.

This was a big win for the farm animal movement. Fewer than 50 full-time advocates pushed the $9B US egg industry to commit to eliminate its core business practice — confining hens in tiny cages — at a cost to the industry of $7B-$9.5B. A 2016 Washington Post front-page story declared a “victory for the animal welfare movement”, noting that even egg producers think a “cage-free future is a fait accompli.”

In an excellent new post, Rethink Priorities’ Saulius Šimčikas assesses the cost-effectiveness of these campaigns and the global cage-free ones that followed them. He finds that, even accounting for the millions spent on investigations and other advocacy that only indirectly supported the campaigns, they affected 12 to 160 years of animal life per dollar spent.

But, two years on, there are worrying signs that some companies may not follow through on their pledges. Marriott and Burger King postponed their 2015 and 2017 pledges, while Disney and Hilton only partially fulfilled theirs. Some egg producers have halted cage-free conversion plans, citing weak demand. A new survey finds the largest US egg producers think most hens will still be caged in 2025.

A great new report by Charity Entrepreneurship’s Karolina Sarek reflects this concern. She reviews historical and industry evidence that weighs on the topic, for instance finding that four major food companies kept only about half of their corporate social responsibility pledges since 2000. She concludes that we should expect just under half of companies making new animal welfare pledges to follow through on them.

Even legislative bans are under threat. Michigan egg producers, who in 2009 supported a compromise cage ban to take effect in 2019, have been lobbying to delay the ban’s implementation. And while the King Amendment is now happily dead, 13 factory farm states are continuing a federal lawsuit to strike down California’s and Massachusetts’ cage bans. So are we doomed to a future with battery cages?

I don’t think so. US egg producers aren’t scrapping cages fast enough, but they are scrapping them. In 2014, the year cage-free corporate campaigns began in earnest, 17M hens, or 6% of the US flock, were cage-free; today 67M hens, or 20% of the national flock, are. That trend should continue: egg producers say they plan to add or convert cage-free housing for 12M hens in 2019 (though they also plan to add cages for 1M). Given most pledges only come due in 2025, it’s surprising there’s already been this much progress. 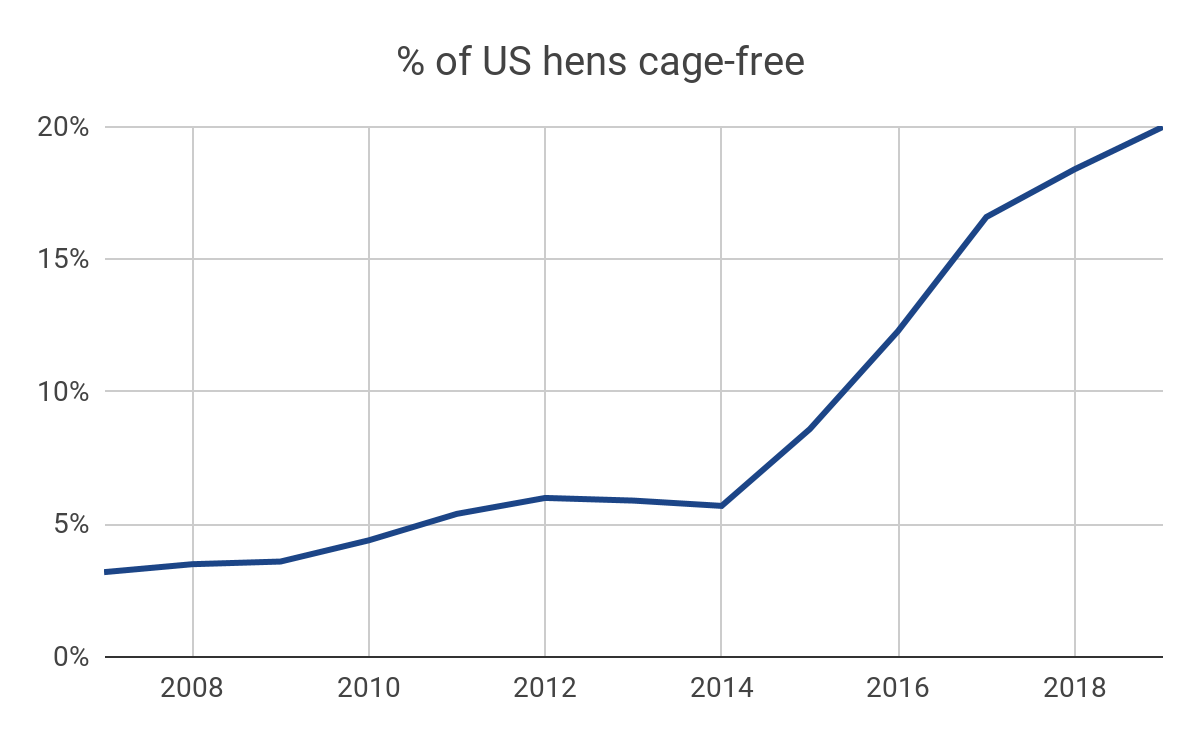 The US cage-free flock has expanded significantly since corporate campaigns began in 2014. Source: USDA.

The progress has been driven by major retailers. Costco has achieved the most impressive gains: when advocates waged a major campaign against it, in 2015, 26% of its eggs sales were cage-free; today 89% are. The four biggest grocers in America — Walmart, Kroger, UNFI (Supervalu), and Albertsons — are less far along, at 12 - 29% cage-free, but still collectively account for about 14M cage-free hens due to their scale. 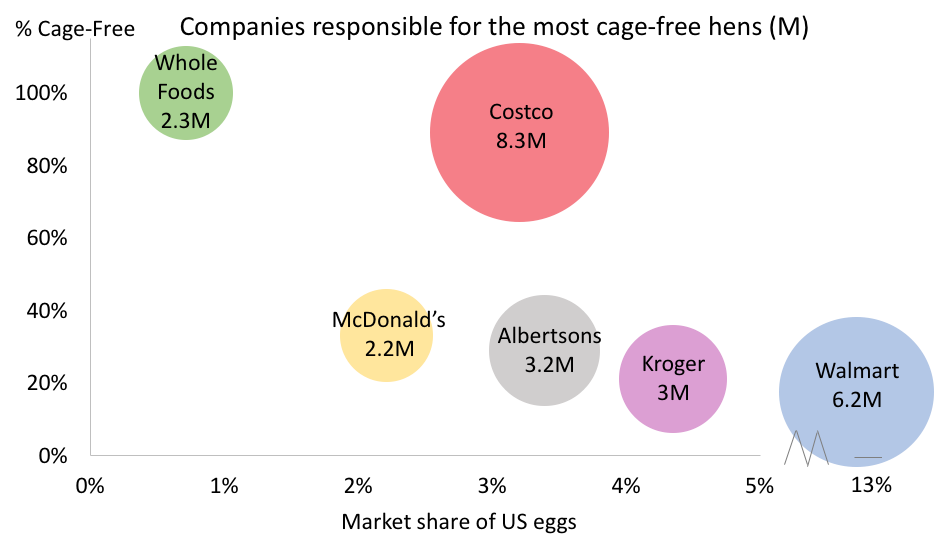 US companies with the most cage-free hens in their supply chain, based on their public reporting. The size of each bubble represents the number of cage-free hens in each company’s supply chain. Sources: estimates of hens in each company’s supply chain, and market share, compiled from USDA data and company reporting; % cage-free data are from the companies themselves, and are not verified: Costco, Walmart, Albertson’s, Kroger, Whole Foods Market, and McDonald’s. For calculating the number of hens affected by shell egg only progress, I assume 90% of eggs sold in retail are shell eggs.

New state laws will speed this transition. Barring a court loss, Massachusetts’ Question Three and California’s Proposition 12 will require all eggs sold in both states to be cage-free by 2022. Washington and Oregon just passed similar measures, effective 2023. Assuming these states are already using about 20% cage-free eggs, their 58M residents will require another 46M more hens and pullets to be cage-free by 2024.

What can we do?

I think a few strategies are particularly promising for holding companies accountable to their pledges.

First, we need to get retailers — which the USDA estimates account for 81% of all eggs covered by pledges — to decrease their sale of caged eggs. Although some big retailers like Costco are on track, most are not. Some are even trying to weasel out of their pledges; Publix warns that weak demand “may impact our ability to reach our stated goal” to go cage-free. We should call out this nonsense. Retailers pledged to go 100% cage-free, not to wait on individual consumers, who surveys show expect retailers to enforce welfare standards. And simple changes — like charging equal markups on caged and cage-free eggs — could make a big difference to sales. 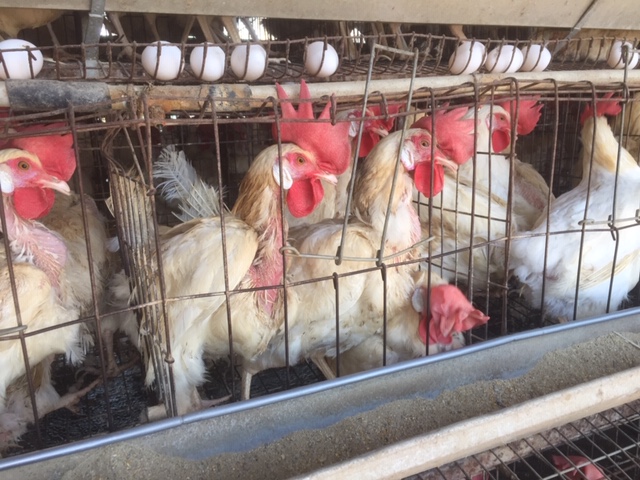 What's at stake: battery cages confine hens in tiny spaces for over a year on end without access to nests, perches, or other basic needs. Source: personal photo.

Third, we need to get companies to set milestones toward going 100% cage-free. The egg industry is right that if buyers all wait until 2025 to go cage-free there won’t be enough eggs. Instead, companies need to set earlier dates by which a certain percentage of their eggs, or all eggs used by certain brands, will be cage-free. Ahold Delhaize (which owns Giant and Food Lion) is a good example: it pledges that four of its US retail chains will go 100% cage-free by the end of 2022, with the final two going cage-free by 2025.

Fourth, we need to keep pressure on producers to transition sooner, and to better systems. New Zealand egg producers can’t keep up with rising demand for cage-free eggs they didn’t prepare for, while UK egg producers are now removing “enriched cages,” installed only a few years ago at a cost of £400M, because the market for caged eggs is collapsing. US egg producers risk making similar mistakes: some are delaying cage-free construction, while others are installing “combi systems,” which can swap between cage and cage-free. We can point out to these producers’ investors and lenders that cages and combi systems could both become “stranded assets,” worthless in a world where all big buyers only want cage-free eggs.

Fifth, we need to campaign against companies that miss their deadlines. The Humane League has now done so with Marriott and Hilton, in each case securing new, much-expanded pledges on tighter timelines. The biggest foodservice companies — Aramark, Compass Group, Delaware North, and Sodexo — all have pledges that come due this year or next, and present obvious targets for enforcement campaigns if they’re not yet 100% cage-free.

Sign up here to receive the farm animal welfare newsletter.

Learn about our partnership with Open Philanthropy to find outstanding giving opportunities and maximize our impact here.